Narrow winding paths; empty roads; an undulation of hills; lone shrubs of cactus trees and other drought resistant trees sparsely distributed are the predominant features of the Semi-arid areas in the Eastern part of the country. The scorching sun notwithstanding, Makueni County is not as dry as many people new to the area might have thought as one notices some greenery along the way.

Communities in this County have understood its ecological patterns and in many homesteads, one will often find tree nurseries planted and this has ensured that the environment is not left bare. Afforestation measures have enabled the communities to plant the different species of trees in their homesteads; distribute seedlings amongst themselves and even sell some to their neighbours and at the market.

Most of the rivers in the greater Eastern region are seasonal and this has posed a challenge to the communities as farming largely remains rain-dependent and many still have to travel long distances to fetch water for their home consumption. The communities have thus come together to build sand dams. The dams have helped in protecting their land as they help to mitigate flooding as well as ensuring that the water is held within its confines and does not dry immediately after the rains. This is very useful as the trapped water is used for irrigation purposes and thus enhancing food security strategies. 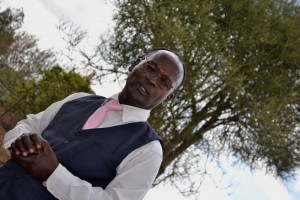 In October, just before the rains, the OAIC team paid a visit to the farmers of Makueni in order to engage with farmers’ groups and distribute seeds for planting. 15 groups were mobilised and they received sorghum; traditional maize seeds; green grams and cow peas seeds from OAIC.  Each group is expected to plant assorted crops in their demonstration farms with each group expected to plant ½ kilogramme of a particular seed on ¼ acre piece of land. Part of the harvest will be stored well in seed banks and will be planted during the next season. It is worthwhile to note that Machakos County were also a beneficiary of the seeds from OAIC during the last planting season and since their crops did well, they were able to sell their seeds to Makueni Farmer’s Group. These seeds will also be distributed to other groups in the Eastern region that did not receive the seeds during subsequent planting seasons. 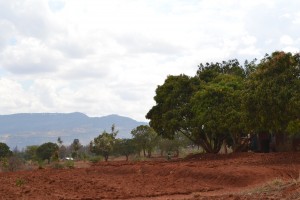 “As you can see we have already ploughed our land and we were just waiting for the rains so that we can plant. We expect a bountiful harvest in this short season. We’re also preparing sufficient storage space that will help us have our own seed banks to ensure continuity of traditional seeds that we have encouraged the farmers to use and this will also ensure that farmers always have seeds to plant, ” Grace Kaesa the groups’ coordinator noted.

Regina Mutuku a revered farmer in Ndithini notes that traditional seeds are the best bet for farmers as the yields are bountiful and farmers use less pesticides compared to regular seeds. Kikaamba for instance is a traditional seed for maize and its suitability for the Ukambani ecological patterns continues to provide the best results. These seeds are also said to contain higher nutritional value as they are in their original form devoid of any modifications.

“Green grams have been doing well in this region and some farmers here have been given 2 kilogrammes to plant by the Food and Agricultural Organisation (FAO). They have promised to purchase the produce one the harvesting season is here. 2 kilogrammes of green grams planted in one acre can yield upto 10 bags,” notes Ms. Mutuku. 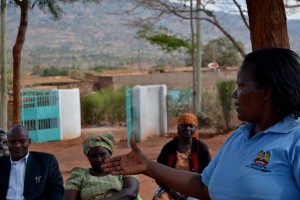 Ms. Kaesa noted that they sometimes buy the green gram seed for between Kshs 80 to Kshs 150 per kilogramme. They take 3 months to mature and one crop is harvested twice per year. This means one can earn between Kshs 10,000 to Kshs 15,000 per 90 kilogramme bag. If one gets 10 bags they would be Kshs 100,000 to KShs 150,000 richer which is in line with OAICs Reedeming Harvest agenda of enhanced livelihoods.

Farmers understand the long term side effects of pesticides and most are embracing organic farming. Ms. Mutuku who is an ardent organic farmer teaches other farmers how to make the organic manure by preparing a compost pit where farm remains are added; water as well as ash which makes for good manure in 3 months time. She has 5 acres of land where she grows grafted mangoes; oranges; beans as well as maize which she sells to the local shops in her area. “I would like to advice every woman to have such trees in their farms as the returns are impressive. One sack of oranges could go for Kshs 2,000.” She further notes the importance of farmer exchange visits as she was a beneficiary of such which enabled her improve her farming. “These visits enable farmers to exchange ideas and share notes on better farming for enhanced livelihoods.” 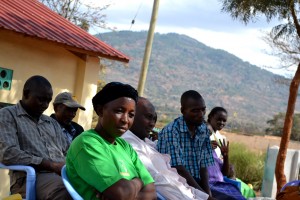 Members from the different farmers groups listening to information being shared

Reverend Naaman Mutua a Farmer Resource Person says well thought out farming practices can increase ones income and make Makueni a food secure zone. He owns 6 acres of land where he grows maize; green grams as well as cow peas. “It’s important to understand the nutritional value of these crops we plant. I advise farmers to eat what they plant rather than selling everything. In my farm I sometimes harvest upto 40 bags of maize and other crops also do well. There is a ready market for these crops and sometimes we even sell them in Mombasa,” he notes.

He nevertheless notes that once harvesting of the produce occurs, most of the farmers end up selling their produce cheaply to the surrounding schools. He notes that most farmers lack proper storage facilities while some still harvest crops like maize when their stalks are still green and thus the regular reported cases of aflatoxin in the region. “Rain fed agriculture is still problematic as when the rains fail, people end up not harvesting much and considering that some have exhausted their produce by selling, this becomes problematic. Storage problems also arise in this area and it’s an issue that needs to be looked at,” notes Mr. Mutua.

Part of the group awaiting seeds for planting