The Unforgiving Army Worm continues to wreak havoc in Kenya, Uganda and Tanzania

Everline Adero a Farmer Resource Person at Rorya next to an affected maize crop.

In 2016, the fall armyworm  (FAW) scientifically known as (Spodoptera frugiperda) was first discovered in Nigeria. 2 years later it continues to wreak havoc ravaging farms across the East African region. Native to the tropical and sub-tropical regions of the America’s, in its larval stage it feeds on over 80 plant species from maize, millet, sorghum, sugarcane, vegetables as well as cotton. Maize is a staple food in Kenya and to over 300 million people across Africa. Uganda’s bureau of statistics indicate that over 3 million households depend on maize. The attack of FAW has greatly reduced yields for lucky farmers able to harvest any produce. This is detrimental to food security campaigns across the continent as the number of hungry people continues to increase.

Researchers note that the worm reported in over 38 Sub-Saharan countries have a number of generations per year and the moth could fly up to 100 km per night. In March 2017, the worm was discovered in Kenya and was reported to have spread from Uganda. FAO indicates that as of May 2017, over  143,000 hectares of land mostly with maize and wheat had been affected. Recently the Kenyan government announced its commitment to fight FAW by setting aside Kshs 400 million. Nevertheless, Members of Parliament have requested that the Ministry of Agriculture sets

A maize crop attacked by the worm in Rorya Tanzania.

aside Kshs 1 billion for mitigation efforts as experts advice for urgent measures to avoid the loss of nearly half the crops. Areas most affected include Uasin Gichu, Trans Nzoia as well as Bungoma areas considered the bread basket of the country. Agriculture is a devolved function in Kenya and stakeholders have put governors in the 47 counties on notice to see what measures have been put in place to combat the worms.

In early 2018, the Tanzanian government noted that it had supplied pesticides to the Southern highlands (Mbeya, Njombe, Iringa) to control the pest which are the country’s bread basket and had also sent an alert to farmers to be on high alert. Rorya, Mwanza and Geita areas have also been affected.  Several campaigns continue to be carried out to sensitise farmers to report to authorities when their farms are hit.  In 2017, FAO gave 2 million USD to the government to boost surveillance.

The OAIC Livelihoods Rorya team inspecting the maize crop and counting their losses after the attack.

Everline Adero a Farmer Resource Person (FRP) in OAICs Livelihoods Programme narrated how the worms attack at different stages. “Sometimes one month old crops are attacked. Other times the maize does well but when it’s about 4 months old it’s attacked by the worm. They feed on leaves, affect the maize tassles, stems of the maize and often prevents the farmers from easily recognizing it. This is a big challenge to the farmers in Rorya and other parts of Tanzania. The government response hasn’t been quite helpful in helping farmers fight the worm.”

Bishop Josephat Robert Magumba from Fela area in Mwanza has a 10 acre piece of land that has also been affected by the worm. “My farm has always been fertile and I haven’t added any fertilizers. The maize crop was doing very well until recently when I came to see the progress and was shocked to find that it has also been attacked by the worm. My previous yields have been great but I am afraid with this attack, our livelihoods have been threatened. We’ve tried to use natural methods like using ashes to sprinkle on our crops but nothing has changed. We’ve also tried to sprinkle chemicals but this has not been helpful and some of them are very expensive for the farmers to buy and we’re afraid that our yields will be reduced tremendously this year.” 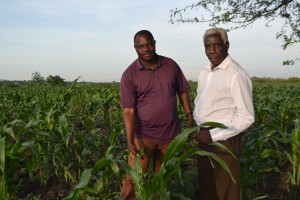 In Uganda the government set aside USD 1.2 million for fighting the worms which had wiped approximately 12% of the produce, about 450,000 tonnes of maize during the last season in 2017. The worm has now been reported in 38 countries from Uganda, Tanzania, Kenya, Mozambique, Zambia, Zimbabwe, South Africa, Malawi, Togo, Ghana, Nigeria and others.

Despite it being a menace in America, they’ve used integrated solutions to combat it. From an effective integrated Pest Management strategies that are environmentally friendly which  includes biological control,  biotechnology as well as pesticides. Contextualised technology transfer to the specific regions could be applied.

A focused campaign from the private sector, research institutions, Universities, civil society as well as development partners in collaboration with governments to strengthen responses and build resilience would be appropriate. Governments should develop policies that ensure farmers are cushioned against such eventualities. Enhancing preparedness through early warning system should be encouraged at all levels.